We use medaka (Oryzias latipes) as a vertebrate genetic model system to study population genetics and developmental processes.

Individuals of wild populations are genetically polymorphic. Thus, even though they share the same set of genes, their genomes contain many sequence polymorphisms that affect phenotypic traits, for example morphology, physiology and behaviour. Often several polymorphisms, mostly SNPs, act on a given trait and lead to subtle quantitative phenotypic variations. A classical example is craniofacial variation of human individuals (Fig.1). The repertoire of genetic variations in a population and their effects on a given trait are studied by genome wide association studies (GWAS) that use statistical analysis to elucidate phenotype-genotype association. 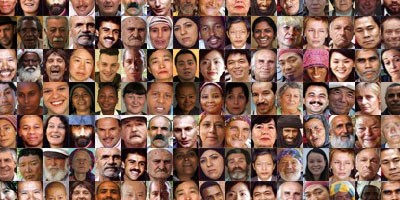 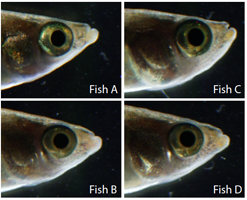 Medaka has a high tolerance to inbreeding from the wild (Hyodo-Taguchi and Egami, 1985). Furthermore medaka wild catches can easily be obtained from their natural habitat in Japan (Spivakov et al., 2014). In collaboration with Jochen Wittbrodt (COS, HD Germany), Ewan Birney (EBI, UK), and Kiyoshi Naruse (NBRP, Japan) we have established a medaka population genetic resource to be used as a vertebrate animal model for GWAS. Importantly in addition to association studies, the inbred panel can be used to test associated SNPs by in vivo functional assays.

Fig. 3: Starting with random crosses of individuals from the wild population a panel of inbred strains was established by inbreeding for several generations. Each inbred line harbors a different set of genetic variants.

By successive single brother-sister crosses over 9 generations we have generated a panel of more than 100 near-isogenic inbred strains starting from a wild population of medaka (Kiyosu). Whole genome sequence analysis showed that more than 75% of the strains are more than 80% homozygous, a value which is comparable to the Drosophila genetic reference panel. The entire panel captures more than 25 million SNPs of the wild population (Tom Fitzgerald, Ewan Birney; EBI). 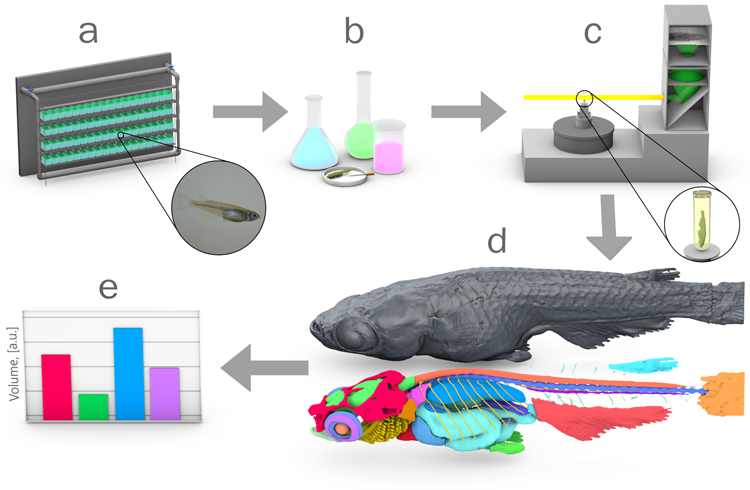 To complement this morphological analysis we are using organ function assays, such as resting heart rate analysis. Recent studies in humans reveal an association of heart rate genetic variants and all cause mortality, such that 5bpm increased heart rate results in a decreased life span of about 2.5 years, underscoring the importance of resting heart rate as a key risk factor.  (Eppinga et al., 2016). 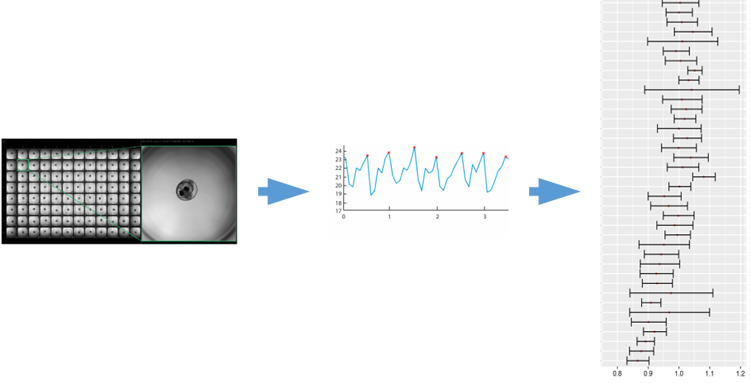 Our assay enables a quantitative measurement of native embryonic heart rate in a 96 well format. The Kiyosu panel allows to model this key trait and to functionally test associated genetic variants. In addition the inbred strains will be used to test human SNPs for functional relevance, which is not possible in humans.

Comparison of data sets from different phenotyping assays across the panel will allow to search for pleiotropic effects of genetic variants. Cross species comparison by comparative genomics will enhance the association power of GWAS data. Associated genetic variants will be tested by genome editing in specific strains of the medaka inbred panel. We are currently developing further assays to phenotype physiological and behavioural traits with the aim to provide a more complete phenotypic description of the individual strains and to establish a data base of functionally relevant genetic variants of the medaka Kiyosu population.

Cells within epithelial sheets are highly polarized with distinct apical and basal domains. This cellular organization is critical to both epithelial morphology and function, for example the uptake of nutrients in the gut, the secretion in epithelial glands or light reception in the neural retina of the eye. Our research aims to identify genes that function in epithelial cell polarity of the vertebrate nervous system and to analyse their specific function.
Prior to organogenesis, the progenitor cells of organs require information concerning apico-basal polarity for their proper development. Mutations that affect apico-basal polarity often perturb the epithelial arrangement of cells and by that also the morphology of the affected tissue (Figure 6).

The development of the transparent medaka embryos can be examined by non invasive microscopy. Thus, their development is not affected by the analysis. To visualize apico-basal polarity in vivo we use GFP-tagged proteins that are specifically localized along the apico-basal axis. The simple architecture of neuroepithelia during early fish development allows to visualize the subcellular localization in the living embryo using a fluorescence dissection microscope (Fig. 8).

Aida, T. (1921). On the Inheritance of Color in a Fresh-Water Fish, APLOCHEILUS LATIPES Temmick and Schlegel, with Special Reference to Sex-Linked Inheritance. Genetics 6, 554–573.

Hyodo-Taguchi, Y. and Egami, N. (1985). Establishment of Inbred Strains of the Medaka Oryzias latipes and the Usefulness of the Strains for Biomedical Research. Zool. Sci. 2, 305–316.